10 February 2012 - 9.00 p.m.: The advance party from Tourism Selangor arrived late that night, after work, just in time for the barbeque and camp fire. They came early to get things ready for the main body, due to arrive early the next day. By my reckoning they were awake till about 3.00 a.m. on the varendah, doing God knows what.

11 February 2012 - 8.30 a.m.: We met the bus carrying the rest of the contingent (all 30 of them) in front of the Batu 18, Police Station. They were comprised of members of the electronic media.10 minutes later they were tumbling down the bus on to the river bank looking somewhat bewildered and lost. Can't blame them. They boarded the bus in posh Bangsar and before they know it, they were standing on the banks of a seemingly raging river, with a fleet of 20 bamboo rafts anchored on the side, not to mention, the 20 Orang Asli helmsmen (aboriginals) barking instructions and orders at each other. But they were alright. They put up a brave front, not to be outdone by the locals. Afterall city folks have their mettle too, though one was close to tears when told that she was riding alone with the Orang Asli guide. I heard later that she was the noisiest after the ride, recounting her near death experience, ironically with non-stop laughing.

Tok Batin Andak was no help. He told them that the trip was full of dangers with crocodiles and comodo dragons waiting around each bend. Anyway, they set of at 9.00 a.m. with all rafters back at Uluhati by 11.30 a.m., from the river to a farm. No too late later lunch was served. Typical Malay kampong fare (Negri Sembilan centric) comprised of keli salai masak lemak cili padi with belimbing buluh, rendang ayam kampong, sambal tumis udang with petai, goreng pucuk paku gajah (you won't find this in town, tropical asparagus) with an array of ulam and sambal belacan, tempoyak, cencalok and budu, guaranteed to make you swoon either out of ecstasy or disgust. No swoon, they came back for seconds, even thirds and fourths.

After lunch was over to Tok Batin. In his typically charismatic calm, innocent and wry humor he explained how the aboriginal blowpipe was made, their darts and poison and how to safely use them. Yes, for many of our visitors this was their first time hearing it first hand, what later to try them. No too bad, most got the target though a couple cheated by standing like two feet from the target, and one became a rabbit specialist. You see, Tok Batin explained that you almost always shoot upwards as the usual targets are birds and monkeys. So when our guest shot the base of the tree, someone quipped that we have a rabbit specialist in our midst. She graciously accepted the honor.

The rest of the day was spent getting to know one another in a very relax environment. The day ended round about 4.30 p.m. after the prize giving for the best photo taken throughout the day. 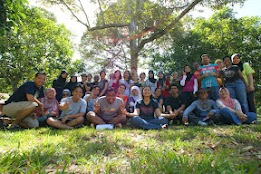 Thank you Tourism Selangor for organizing such a great day. We had fun hosting you. Hope you enjoyed our company as well.
Posted by ULUHATI at 5:23 AM No comments:

ULUHATI
Ulu Langat, Selangor, Malaysia
Uluhati is a farm located in the hills of Ulu Langat, Selangor, about an hour’s drive from the heart of Kuala Lumpur. Beginning from a fruit orchard Uluhati has evolved into a site of multiple activities which has made it a place of interest to visitors of all ages, backgrounds and needs. Today at Uluhati, whilst we still have the fruit trees, Uluhati also has a collection of farm animals, which include several horses and ponies. Uluhati also provide accommodation facilities for staying guests in the form of Borneo style longhouse, a unique farm stay experience. So what can visitors do at Uluhati. The list begins from the simple educational farm tour for both children and adults to family and corporate events of various sizes and complexities. Uluhati also organizes off-site visits and activities. These would include visits to nearby areas of socio-economic interests and for the adventurous, a range of outdoor activities like jungle trekking, camping, mountain climbing, fishing trips and river rafting